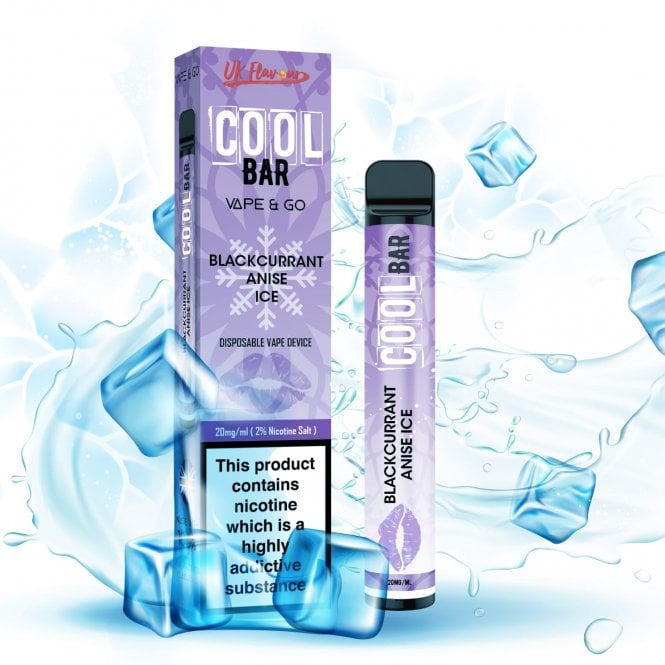 The device can be used straight out of the box is draw activated. This means no button presses, no setup time, simply unpack from box and begin vaping.

Containing a 400mAh disposable battery, these disposables work at fixed wattage of 9w until the battery depletes. Once the Cool Bar no longer works, simply dispose inline with your councils recommendations on battery disposal.

We can ensure the Cool Bar vapes we are selling have are bought directly from the manufacturer, with full traceability and are UK legal, TPD notified devices. There are many counterfeit disposable vapes on the market, so we urge you to only buy your Cool Bar disposable vapes from trustworthy retailers like ourselves who care about your safety and can provide a guarantee of their products authenticity.

*Number of puffs are an approximate which do not take into account variation in the way people vape (duration of puff, taking lots of puffs in a short time span, operating temperature).

Cut off time for same day dispatch is 12pm. Any orders after this may not ship until the next day.

UPS: Calculated based on order weight

We offer Royal Mail and UPS options, both of which are calculated based on order weight at checkout.

You have the right to cancel your order at any time, up to 14 working days after the day you receive it. For more detailed information on our returns policy, please see our returns page.

We no longer charge VAT on orders from the EU. If you are ordering from outside the UK you may need to pay VAT / import tax & duty when your parcel arrives in your country. For more information, please see our Customs & Duty page.

The website uses strong encryption using SSL & TLS technologies, so you can be confident that making your payment online with Vapour Depot is safe & secure.

Debit & Credit card payments are processed by Worldpay and we never see or store your card information on our website.

We accept Visa, Mastercard, American Express card payments, or you may choose to pay by bank transfer or crypto currency.

Contact us with any questions you have about this product

This product has not been reviewed yet.